7 Weeks to a New Showroom!

WEEK TWO:
We made a lot of decisions about the electrical (whew!).  Now the work begins.  It involves a lot of chopping, drilling and concrete dust, so this part is done early mornings, evenings and weekends so as not to disturb the other showrooms. 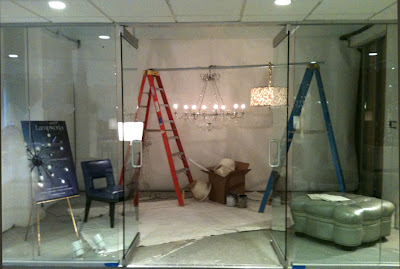 This past Tuesday was the annual "What's New What's Next" event at the NYDC.  Since we were not officially open, but wanted to have a presence, we set up a "construction vignette" with chandeliers on ladders, a few pieces of our new leather line and a pile of lampshades peaking from a packing box.

We displayed a chair and ottoman from Leathercraft.  Their furniture is amazing.  It's all made from beautiful, top-quality European leather, eight-way hand-tied construction and is custom made in 3-4 weeks!
As you can see, the choice of style runs the gamut from Contemporary to Classic.  If you want to design your own styles or reinvent ours, be our guest! 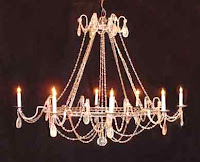 We also showed our signature chandelier, the Dulce, which received a lot of attention.  ﻿
The best part of our lines is that they are Made in America!  So, quick lead-time for custom fabrication and a short footprint is included at no extra charge!

Now, we have to meet with the other contractors to figure out where everything else will go.  Oy!

7 Week Countdown to a New Showroom!

WEEK ONE:
Lampworks has begun the third incantation of it's professional life in NYC.  In 1996 we opened in the D&D Building, or "979 Third" to the locals.  Five years later, when we needed to expand into larger space, we moved to 58th Street in September of 2001 (good timing eh?).  At that time it would have made a good location for filming "Midnight Cowboy".  Just a seedy-looking street that leads to the upper roadway of the 59th Street Bridge, it has always been home to great restaurants like Felidia; but her jewel of a building was the exception, not the rule.

As more and more home furnishings merchants gentrified the side streets surrounding the D&D, A&D and Fine Arts Buildings, we improved properties.  Since the values went up, property owners proceeded to raise rents.  It became a win/win for landlords and a lose/lose for tenants. 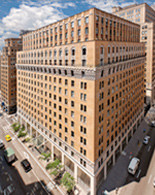 So, here we are, September, 2011 and we're doing our third build-out in 15 years!  We are moving into the NYDC, the New York Design Center, lovingly referred to as "200 Lex".


﻿Our new space is a "usable" 1,677 square feet. As of today, it is a concrete box with 10'-8" ceilings, and two tall windows that look out onto Lexington Avenue and 32nd Street. Keep in mind that ceiling height is everything to a lighting showroom.  We have exactly seven weeks to complete a build-out, move in and open!
﻿﻿﻿﻿﻿﻿﻿﻿﻿﻿
﻿﻿﻿﻿﻿﻿﻿﻿﻿﻿
The NYDC was built at the turn-of-the-century, so ﻿ceilings are composed of clay and cannot hold more than 25 pounds.  For most showrooms that's not a problem, but for Lampworks... well, we will have to install  steel extrusions called Kindorf that are literally bolted to the bottom of the I-beams by sawing away the concrete and plaster that surrounds them.  The Kindorf is electrified and the beams must be restored.  This brings our "ceiling height" down to  9'-8" - not a very comfortable height to hang large chandeliers.  We have a lot to do!

We're planning everything down to the inch, but where to display large chandeliers?  Yikes!  And - we're making room for a new category - furniture.  We'd also like to reuse as many of our existing display fixtures as possible, but don't want the space to appear crowded.  It's very tempting to put ten pounds into a five pound bag -exactly the look we want to avoid!  We'll let you know how this plays out when we get to Week Two.  Stay posted!
Posted by Bebe Regnier at 7:54 AM